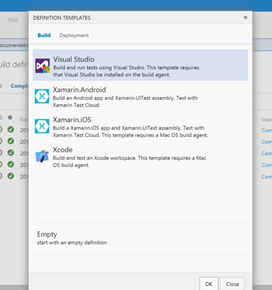 Late last year, Microsoft announced that they were working on a new build system to support TFS.  Among many other things, the build system would have a web-based editor (no more XAML), reduce the infrastructure footprint to deploy your build agents, and support cross-platform out-of-the-box.  This year at the //build/ conference, the new build system was officially unveiled and made available to Visual Studio Online users and on TFS 2015 Release Candidate.

The new build system gives you all the web-based tools that you need to create and manage your builds. Collaborate with your entire team by building Visual Studio, Xcode, Xamarin, and many other types of projects.

This course gives you a first look at the new system and shows you how to get started by creating build agents and build definitions. The course shows you the new cross-platform capabilities by setting up Visual Studio, Xcode builds, and deployments to Azure by using the new Azure deployment templates.