Last weekend we held our 7th annual Orlando Code Camp at Seminole State College.  It was a really successful event and a lot of fun to put together.  We really have an awesome team at ONETUG which helped things run really smooth this year and we were even able to try some new things.

We started preparing for Code Camp around October of last year.  The dev team led by Z, with John Smith, and Brian Hall and a little bit of me got cranking on a new version of our site.  Last year it was Silverlight, and this year we went with MVC3. The team had some really great ideas and pretty much all of them got implemented.  We got a ton of compliments on the site’s look & feel, features, and easy of use.  Around mid-February, the site was basically completely done.  The team added some cosmetic changes as we got closer to code camp, but it was a great feeling knowing that we had a fully-functional site so far in advance.  As Z mentioned in their Code Camp talk, last year we were coding all the way up to the day before code camp. 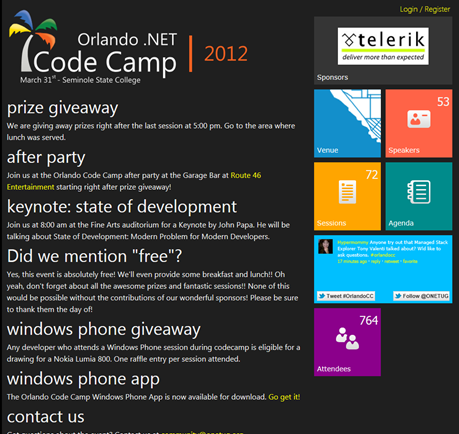 So once the site was “done”, we turned to our Windows Phone app.  Brian Mishler volunteered to run with it and did a fantastic job!  We ended up with a really cool app and an odata service that can be consumed by other apps.

Apart from the technology side of things, we also took care of getting sponsors (Brian), tracking all the money received and spent (JT), finding a location for our speaker and after parties, arrange lunch, print agendas and signs, stuff bags, buy water/sodas/candy, and a variety of other things that go on behind the scenes.  And of course, we also secured a venue at Seminole State College.  What I always tell people is that once you have the venue, that drives the date.  And once you have a venue and a date, it all seems to take care of itself (mostly).

As always, we had an awesome speaker party.  This year it was sponsored by AgileThought, who is also my employer.  It was great to have the crew there and to get their support! It was a great time to meet with all the speakers, give out the speaker shirts and beer mugs and just relax in preparation for the next day.

We met at Seminole State at 5:30 am to setup.  This year we unloaded the van the day before so we didn’t have as much heavy lifting to do in the early morning.  We still had plenty to do like setting up sponsor tables, unlock rooms, test rojectors, microphones, setup registration, coffee, donuts, etc.

The crowd started streaming in at 7:00 am and they walked in to a room full of sponsors, hot coffee, bagels, and donuts.  We then turned our attention to our auditorium were the keynote was taking place.  Jaime, the A/V guy from Seminole State had us all setup and made it completely seamless for us with 3 mic’s, huge projector, and the all-important clicker.

After some last minute checks, I kicked off Code Camp at 8:00 am in the big auditorium.  Here is my Metro-style PowerPoint deck.  It was a bit cheesy, but people seemed to enjoy it:

Brian then presented our top sponsors and then the moment everyone was waiting for: John Papa came on stage and gave us a really awesome keynote.  It was the first time that we’ve done a real keynote since I got involved with code camp and it was really well received.  The message was great and very good visuals (although I’m a bit partial since I was “featured” in a few slides, such as this one 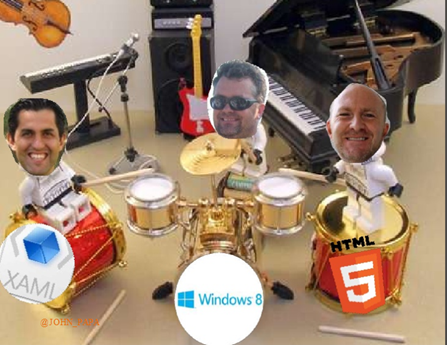 The event proceeded throughout the day with no issues.  We ran out of ice and coffee and John went out to get some (note for next year: more ice and coffee), but really, that was the only glitch. Lunch was catered by Lou and was very well received…he never disappoints!

I spent most of my day hanging out in the common area, there was some great energy, especially as each session let out and you could hear everyone talking about what they had just learned.

We finished the event by giving out a couple of XBox 360’s, BestBuy gift cards, a Kinect, software licenses from our sponsors, and a 60” TV.  Our sponsors came through for us big time!  John gave everyone a really inspirational talk about our community and what we are trying to build here, it was really put.  He is great at vocalizing our thoughts.

The whole event was a huge team effort by the ONETUG team plus some awesome volunteers throughout the whole day, especially Brook Ranne and Dave Noderer.  Our speakers were awesome, with a great mix from out-of-state guys (Elijah Manor, Atley Hunter, David Giard, Kevin Griffin, to name a few), Florida, and our backyard here in Central Florida. We got a lot of great advice from John Papa, especially around keynote logistics.  And of course, nothing gets done in Florida without the great support that we get from our Microsoft lifeline Joe Healy.

And now we wait ’til next year for an even better/bigger event.  Don’t be surprised if you see something else pop up this year!  We have some great plans for Orlando!

Courtesy of Russ Fustino from GrapeCity.

Our awesome t-shirt, designed by Leon Terry got a ton of compliments: 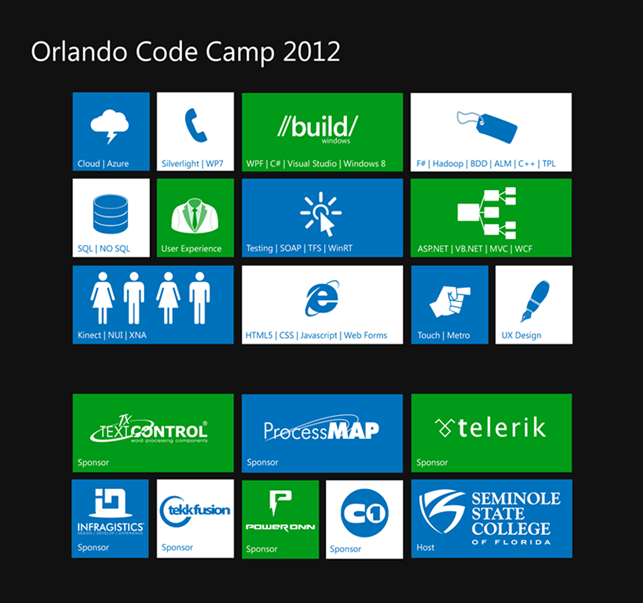 And here are some site statistics on the www.OrlandoCodeCamp.com site, comparing last year’s visits against this year (4 weeks leading up to the event). 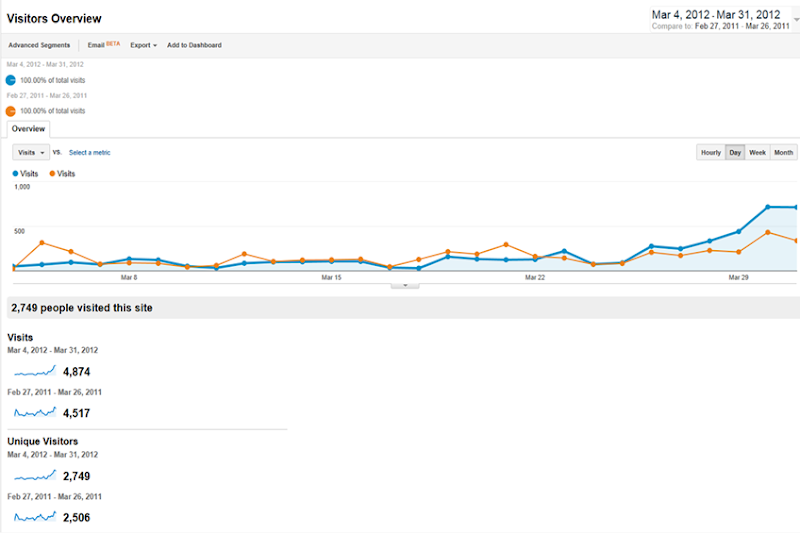